One of the world and European relay champion, Derek Redmond is now one of the motivational speakers. Now, he shares his inspiring and remarkable story with his audience and has worked with some of the high profile brands to inspire the corporate environment. During the 1980s and 1990s, Derek was one of the country’s best athletes and had broken the British 400m record at two occasions. 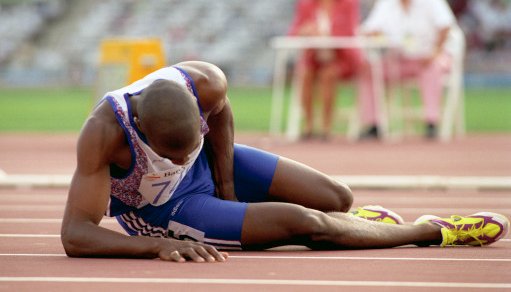 He completed at the highest level for over a decade and was a key member of the relay squad that won gold at the 1991 World Championship in Tokyo. By that time, Derek has established himself as one of the best athletes and was a sure sign of success in future. He stunned the sporting world alongside Kriss Akabusi, John Regis, and Roger Black as Britain won over the favorites of USA to win gold. That run is still remembered as the second fastest 4×400m in the history.

After proving himself as a relay runner, Derek wanted to prove himself as an individual runner. He went on to represent his country in 1992 at the Olympics in Barcelona and became a part of the one of the most motivating moments in the Olympic history. He went into the 400m semi-final to race amongst his favorites. Everything seemed fine during the run, until…it wasn’t. He fell onto the ground as if he had been shot.

After passing the 250m mark, he tore his hamstring. He got up with the excruciating pain and got determined to finish the race by hobbling towards the finish line. His father came to his help and the 65,000 strong crowds cheered him on. This moment has been voted since then as one of the most inspirational and was referenced by Barak Obama in his presidential speech as moments when the human spirits triumphs over the injury that should have been impossible to overcome.

Derek’s injury was a sure sign of an end to his athletic career but it didn’t keep him down. He finished his race even though he knew that he won’t be racing anymore.

There is a real lesson to learn in Derek Redmond’s inspirational story for everyone.

No matter how much you struggle, you always have to finish what you start.

You need to work on your goals and you should be proud of your efforts.

Following are the ways you can finish what you have started in life:

When it comes to finishing on the lingering task, you first need to make a decision to get it completed no matter what. You must say no to more things and should alter your behavior and get done with your already existing to-do list.

If there is something you cannot finish in a day, you must break down the task into smaller ones and work daily to get them completed. Make a plan and stick to it for actually getting things done. You can even create calendar boundaries and should work uninterrupted.

It is very important that you include deadlines for your projects. Most of the people fail to finish what they start because they don’t have any deadlines. You need to push through to complete the steps of your action plan by skipping lunch or getting up early.

You should not wait for a specific time to get started. As soon as you have the plan in front of you, get started and take action. Get down with the first step and focus on getting it completed.

Complete whatever you work on:

Once you have made the plan and have started working on your project, you feel the burden lessening. But it is the most important step that you complete whatever you are working on. Do not allow it to linger on, make sure it’s complete and saved properly.

Via: Awesome Stories and Entrepreneur