Your iPhone performs better in one hand than the other.

In past few years, there have been many debates about how users hold their mobile phones. The simplest assumption that satisfies our mind is that we hold the phone with the hand with which we feel most comfortable. But in reality, that’s not the case especially with today’s smartphones.

Technology has changed the entire face of the smartphones. It is no more just a touch-screen; it is a lot more than that. It may sound ridiculous to some, but there is a huge difference when it comes to getting a cell phone’s signal reception. The way people naturally hold and interact with their mobile phones does affect the mobile’s signal reception.

According to a report by Professor Gert Froland Pederson of Aalborg University in Denmark,
“Holding the iPhone 6S in one particular hand while on a phone call can mean you get worse cell signal reception than if you hold it in the other.”

Below is given a graph from Pederson which clearly depicts the signal strength of phone calls for holding different kinds of smart phones in your hand. Between 6S and 6S Plus, there is a lot of difference.

Samsung, Xiamoi will work better if held in left hand where as iPhone, Nexus 6p have better signals in right hand.

The difference starts to reduce with the other brands including iPhone SE. 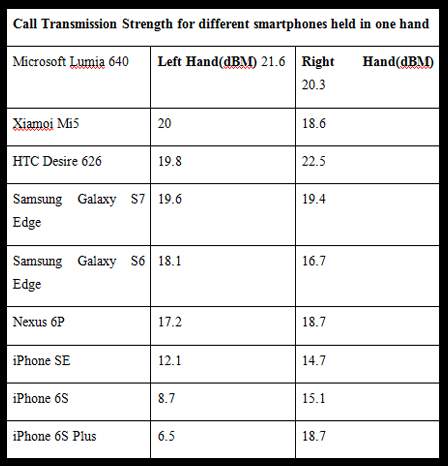 The report states that the difference is not much greater when the phone is being used for surfing the web, using apps, browsing social media, or streaming videos or music. The difference arises when you hold your phone while calling.

According to Pederson, the antenna in the phone affects the smartphone’s signal strength while holding it to the head while browsing. The difference in strengths deal with “body loss” which is actually the interface caused by our bodies and the way antenna were intended.

So while holding your iPhone 4 and even the iPhone 6S and 6S plus, you receive low signals, and then you might be holding your phone in a wrong manner. It is also because the iPhones are not intended to cover up for the body loss effectively.

But it may also happen that you do not get affected by the weak signal issues because of living in a location where you receive extreme signals strength. If you live in an area where this problem usually occurs than it is better to purchase a phone can cover up for the loss. And also holding the phone in right hand can be of much greater help.