Twitter has now adopted a feature that has long been used for its messaging feature and app. this feature will allow Twitter users to review direct messages that are received from people who are not being followed.

This new feature works for everyone by turning on the setting that allows receipt of messages from people who are not followed. It will allow users to either delete or accept inbound messages. The people who will send the messages will not be able to see whether a user has viewed them or not. This will happen until a user choses the accept option. Even if a user deletes a message, he/she will not be able to stop the user from messaging again. It is here, when the option of block appears and users will not be able to see media that is sent from people who are not being followed until the “Accept” option is chosen. This is good as it will save people from irritating images and unpleasant video surprises. 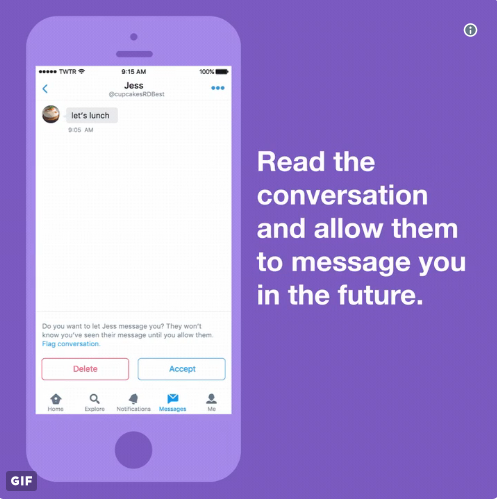 In the new inbox in the messages tab on iOS on Twitter, Android today, and Twitter.com, the new conversations from people who are not followed will be flagged as requests. This is a clever way to encourage people to open up Direct Messages and keep them open. It will provide them a kind of protection against potential abuse.

If you’ve opted-in to get Direct Messages from anyone, messages from people you don’t follow will go into requests.