On Thursday Bitcoin reached to the lowest levels in two years. The currency earlier fell by 20% but this time it went down 13% to $985.68 per coin as of 11:10 a.m. ET. But on the first trading day of the New Year, for the first time since 2013 the crypto curruncy crossed the $1,000 mark. But now it has dropped down from that level. 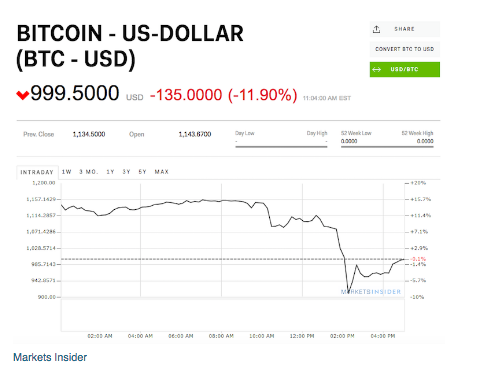 Just before the fall Bitcoin almost gained 100%. The reason for its surge was the renewed interest from China. Bitcoin in China became a strong currency whereas its own currency Yuan continued to fall. Since record keeping began in 2010, Yuan experienced its biggest two-day surge on Thursday. It happened because the Chinese government made all efforts to stop the outflows from the country. The overnight borrowing costs in Hong Kong went up to 100%. Yuan’s rise has pressed the investors who were expecting further fall in Chinese currency. US dollar, which fell against other currencies is under pressure because of Yuan’s rise.