Internet is growing fast and the emerging markets are already bringing in billions of new internet users. On internet, Facebook is one of the best platforms to do business. One can use Facebook to increase likes and followers and grow their business online.

The one who knows how to use the internet to their advantage for maximum online exposure is destined to succeed and win over the competition.

Alibaba’s Jack Ma was smart enough to have an eye into the future in 1996. He was almost broke but wanted to use the internet to empower people and in the process, he became China’s richest man in a few years. He believes, you only become successful when you help others.

Facebook is the world’s largest social media platform with over 2.1 billion active users. People use Facebook for staying in touch with their friends. Businesses use Facebook pages for growing their online presence and increasing sales.

As a keen student of human behavior, I always try to learn what causes a certain behavior of people online and offline. I’ve been doing some strange experiments on my BeingGuru Facebook page and have experienced some amazing results.

I’ve observed, in order to get great engagement on Facebook, a post needs to build a story first before asking users for their participation.

In simple words, a story could be an inspiration, highlighting a motivational touch, or have an emotional feel to it, and then, it can involve a reader by asking a question. 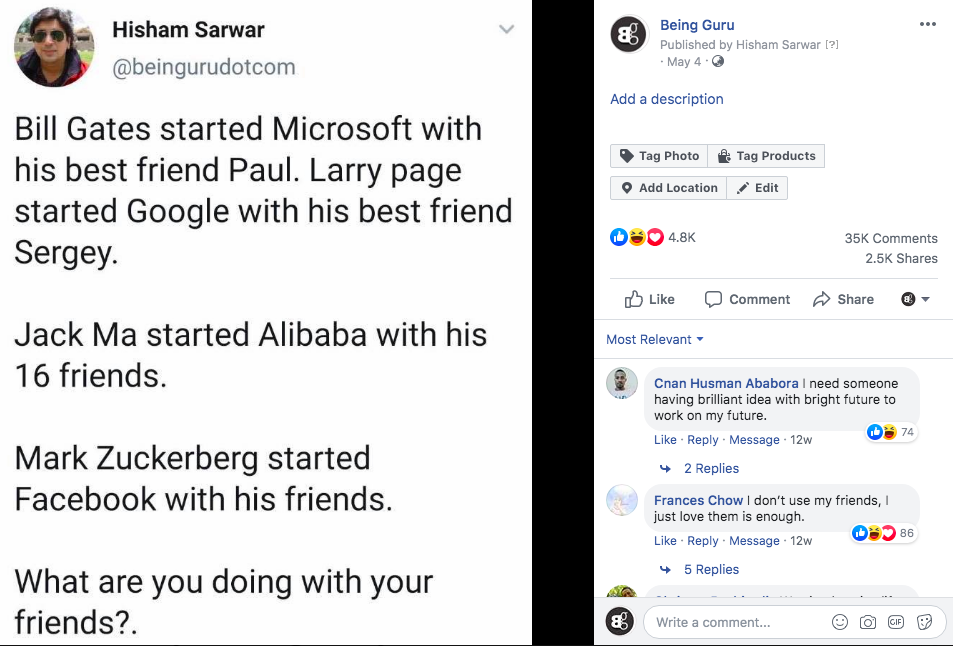 The beginning of the post narrates a true, amazing motivational story of the world’s famous icons. The posts show, how these famous personalities started their amazing ventures with their friends. The list line requests users to voice their opinion by asking ‘”what are you doing with your friends“?

As you can see from the screenshot above, nice storytelling followed by a question asking users for participation has engaged people from all over the world. The only country missing in this post engagement is China, sadly Facebook doesn’t work there.

The post has more than 35,000 comments, shared more than 2.5k, and has around 5k likes and that’s only on the initial post. I will show you the overall states including shared post-reactions and engagement as you read on. 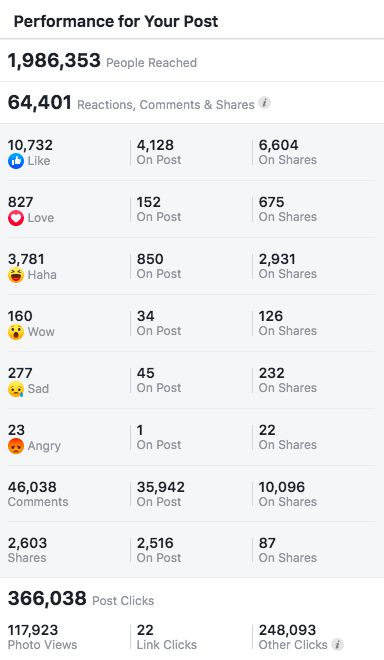 A further detailed look at the post tells that the content has done equally good on its shares, fetching almost double likes and engagement and extending the outreach to almost 2 million users on Facebook. This is huge for a non-paid post. A surprising 10k likes and over 46,000 comments.

The point here is, a good — engaging Facebook post not only engages the audience by increasing Facebook likes and followers but also results in the popularity of your page. A popular Facebook page can be used for advertising your product or service.

You become what you study, so choose your study materials very carefully. Spend time reading and read a lot as that’s the best way to learn.