Google is investing heavily in up-skilling Indian IT landscape. It was only in July last year, Google announced the training of Android Skilling and Certifications for around 2 million Indian developers. The program was signed to be carried over in the period of next three years. This year on November 23rd, Google has announced that it aims to build a highly skilled tech workforce in India.

Google has partnered with Pluralsight and Udacity to provide training in emerging technologies such as Mobile and Web Development, Machine Learning, AR/VR, AI, and Cloud Platforms. The program aims at offering no less than 1.3 lakh scholarships to upgrade Indian developers in above mentioned emerging technologies.

Google will sponsor 100,000 scholarships on the Pluralsight technology and 30,000 Scholarships on Udacity. The aim is to Up skill Indian developers to gain access to advanced, emerging technologies.

All tech firms have responded favourably to the market requirement for re-skilling and many companies are actively working to actualise these requirements internally. This scholarship programme from Google will go a long way in inspiring more IT professionals in India to take up advanced courses offered under the programme and boost the re-skilling initiative across the industry. – R Chandrashekhar, President, Nasscom 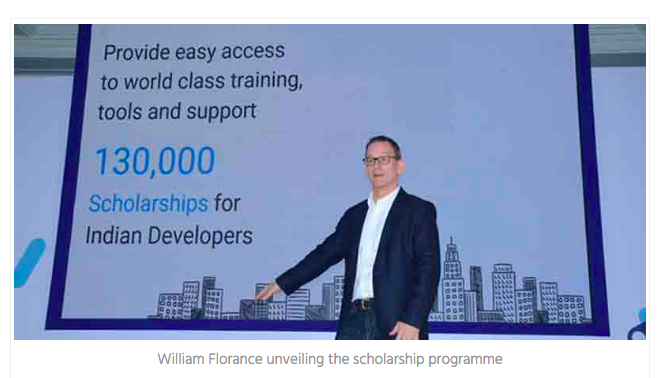 “In the last one year, we have engaged over half a million students and developers across India through a variety of programmes and initiatives. Since we announced our skilling initiative in India, 210,000 students have completed Google-developed courses on Udacity, with 117,000 students completing the course this year. To build on this momentum, this scholarship programme will make it easy for students and developers to gain the skills they need to be successful in the changing technology landscape,”

Interested?. Mark your calendar for December 12 in Bengaluru and apply today.