Climbing Mount Everest is a challenge that is taken by thrill seekers only. They crave the intense adrenaline rush to take on such arduous journeys. But climbing Mount Everest cannot be on everybody’s bucket list. You need a yearning to attempt Everest at first place. It requires a lot of preparation including mental tenacity as well as technical expertise. Fascinated by the idea of climbing Mount Everest and achieving praise from the world encouraged a couple to fake their photograph as successful climbers of the Everest.

An Indian couple made it to the headline for climbing Mount Everest in September 2016. Later on it was proved that they faked their photos by using Photoshop. Interestingly, both claimed climbers were police officers in India. After an investigation, they have been fired for deceiving the world on a journey they never took. They claimed that they climbed the mountain on May 23rd in the year 2016. For proving they actually did it, they presented morphed photos to the world which gained them popularity on the international level.

According to the police commissioner Sahebrao Pati, the couple has been fired for sharing misleading information with the public and brought disrespect to the Maharashtra Police department. It is still not known that whether the couple will face any charges for their actions by the Indian authorities. But Nepal has banned the couple from mountaineering in the country once their separate investigation proved their climb a fake one.

The couple named Dinesh and Tarakeshwari Rathod published their photos once they announced their climb and pretended those images to be taken during the journey. But soon afterward, other climbers came forward claiming for the photos. 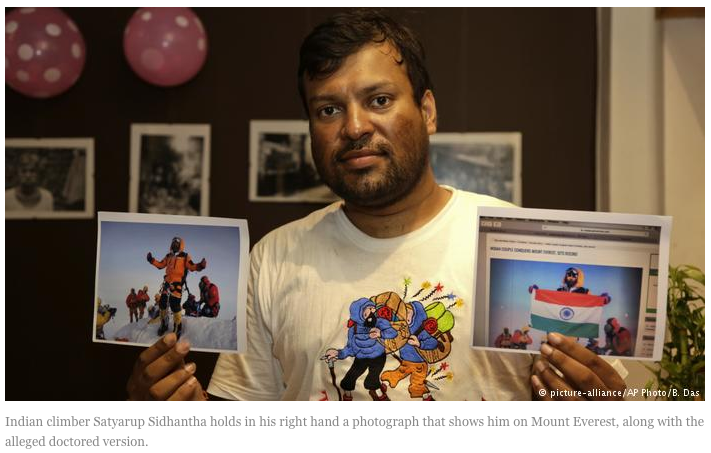 The biggest mistake the fake climbers made was that they presented their images wearing different sets of climbing outfits. In reality, changing a climbers gear cause of a lot of difficulty and exhaustion therefore they never change their gear.

Initially, the couple however gained immense popularity for being India’s first couple to climb the Mount Everest as well as earned a lot of money from their speaking engagements and agreeing to book deals.