Humans need to get ready for income inequality in the future as Robots are getting ready to take over many jobs. There would be 20 million manufacturing jobs all over the world by the year 2030 but Robots will take over these jobs from humans.

In a new study from Oxford Economics, economists claim that the next decade orchestrates for robots to take jobs from humans. There could well be 14 million robots put to work in China alone.

20% Proportion of the world’s robot stock located in China. Approximately every third robot is now installed there. Report claims.

Analyzing the automation in the workplace, Economists analyzed trends prevailing in the long-term by looking at the past trend, by identifying robots worldwide that have been put to work, almost threefold in the last 20 years, raising the number to about 2.24 million in this period.

Identifying the drawbacks humans should expect to rise including but limited to income inequality, researches predicted the rise of robots in the future will certainly bring benefits in terms of better growth and productivity on the world’s economic front.

“As a result of robotization, tens of millions of jobs will be lost, especially in poorer local economies that rely on lower-skilled workers. This will, therefore, translate to an increase in income inequality,” the study says.

Global GDP could rise to 5.3% if robot installation were boosted to 30%, more than the basic baseline forecast by the year 2030.

“This equates to adding an extra $4.9 trillion per year to the global economy by 2030 (in today’s prices), equivalent to an economy greater than the projected size of Germany’s,” the report states. 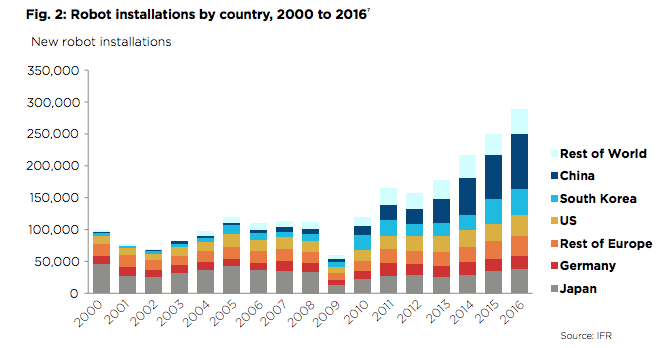 3 Reasons for the Robot Surge:

The report takes a deep look at the reasons why there’s a huge robot surge is expected worldwide and states three reasons that Silverline the rise in demand and usage.

Trend #1: Robots are cheaper than humans.

Trend #3: Demand for manufactured goods is rising. China is investing in robots to become a global manufacturing leader.