UPDATE: It is only google signed-in accounts that are unable to access Gmail, YouTube. If you open these services in the Incognitoto window, they load fine. For now, it seems like there’s something wrong with the user accounts who are logged in to access different Google services.

Gmail users found themselves being greeted with a “Temporary Error” message today in most parts of the world. Many Google services, including Gmail, and YouTube as well as analytics have stopped working in the last few minutes. 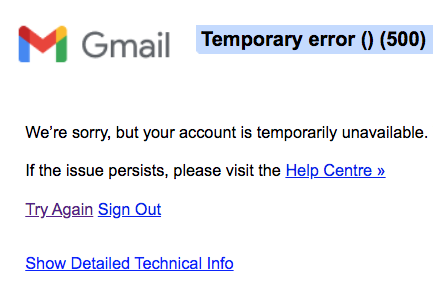 This is probably the first time Google servers have crashed in 22 years leaving millions of people unable to use their services.

The question is: How long will Google be down for? This is Developing News: Stay Tuned for further updates.