Good news, for all those who are tired of being added to the WhatsApp groups and then it is hard to leave those groups because you were added by a special contact. WhatsApp is now activating the group privacy setting feature for iOS and Android. The new version of iOS beta 2.19.110.20 and Android beta 2.19.298 will have this amazing new feature. 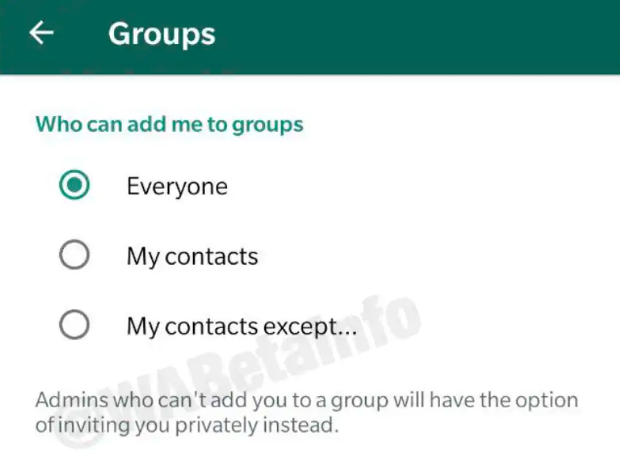 Whatsapp tested the feature for Indian users and is now testing it in other markets. It was spotted in the latest Android and iOS beta versions but now there is a slight tweak in the functionality. Instead of the “Nobody” option that was earlier spotted by WaBetaInfo, a new blacklist option is introduced. You can add people on that list and they will never be able to add you to any WhatsApp group.

In case, you do not see the latest features in the beta versions of your phone, try taking the backup of your chat first and then reinstall WhatsApp to activate it.

You can see new options by going to WhatsApp Settings > Account > Privacy > Groups. Three options available for selection are Everyone, My Contacts, and My Contacts Except.

Another exciting update is, WABetaInfo reports, WhatsApp Web users now have the ability to listen to voice messages consecutively. The feature lets you autoplay all messages without clicking on them. It is available on both Android and iOS but now introduced to web/desktop versions too.