After the Christchurch live streaming incident, the eyebrows were raised and questions were asked about the Facebook live stream and privacy standards.

In an attempt to enforce more privacy on the platform, Facebook has exerted so much over-filtered artificial intelligence control on the content that even the random pictures such as selfies, beautiful sceneries are being flagged for violating against the community standards.

It is getting very frustrating for users who typically use Facebook, the world biggest social media networking platform to connect with friends and families. Some of their random family pictures and selfies are being flagged for violating against the community standards and they are thinking, it is a hacking attempt or probably someone has reported their profile.

The only logical reason one can figure out for such an extreme step by Facebook is to enforce maximum privacy and to ensure that Facebook becomes a close networking platform but hey, wait a minute, there seems to be a problem with facebook AI (artificial intelligence).

It is picking random pictures and mistakenly marking them as content that should not be on the user’s profile or page.

Take a look at these 2 warnings received by two different users and clearly, both pictures are not violating the community standard. These are just normal selfie pictures and family pictures. 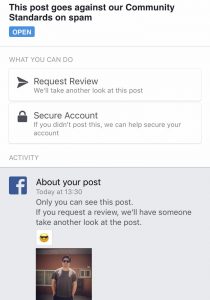 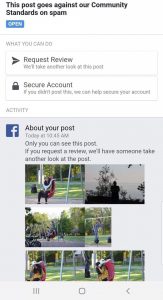 A lot of profile and page owners are facing this problem worldwide. We are not sure if Facebook is working on identifying this issue and fixing it soon. People are already getting frustrated over this issue and this would be the last thing Facebook would want to have people leave its platform after the Cambridge episode and third-party data-information leakage. Earlier this year, Sheryl Sandberg, Facebook COO said that after all these recent problems, Facebook must earn back users trust. This probably is another wrong foot forward in an attempt to get things right.

Have you faced this issue yet?

We would love to know your thoughts in the comments section below.