Alibaba’s sales on 2017 Singles day were $17.8 billion and last year in 2018, it only needed 12 hours to beat that record. On the same day last year, Alibaba smashed its single’s day record as sales crossed $25 billion.

This year on the Single day, Alibaba set a new Singles’ Day record With $31 billion in sales. This is Alibaba’s record as shoppers swarmed the e-commerce giant’s online stores.

Alibaba is the China’s largest company. The company televised entertainment spectacle featuring Cirque du Soleil and Mariah Carey to boost the sales. It was reported that Xiaomi Corp., Apple Inc. and Dyson Ltd. products were the top three brands in the sales.

According to the Alibaba website, Alibaba surpassed the 100 billion yuan mark less than two hours into Singles’ Day.

With the economy on the dive, saturated markets, the challenge for Jack Ma and his team was not only beating the previous year sales record but also create a new milestone for the company by beating their competitors such as JD.com Inc. and Pinduoduo Inc.

“Alibaba is making use of all of its platforms to make Singles’ Day a holiday that also includes dining and entertainment,” Jet Jing, president of Tmall, one of the company’s main sites, said at the Singles’ Day event. “We’re connecting online shopping with offline physical outlets.” 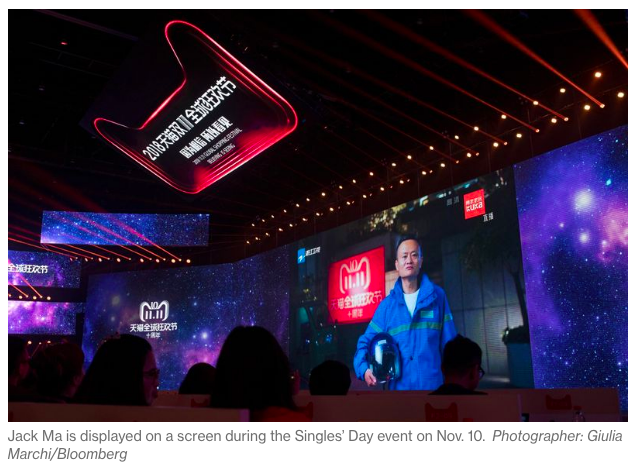 Nov. 11 has emerged as an antidote to the sentimentality of Valentine’s Day in China. The date is typically recognized as 11/11 in China.

The article and picture appeared on Bloomberg.