We all know Bill Gates as the world’s second richest man, co-founder Microsoft and now a philanthropist running Bill & Melinda Gates Foundation. He is a college dropout who turned out to be the most successful icon in Software industry. Gates, had a vision of seeing computer in every house in late 70’s

What?, Computers, why would someone replace their typewriter for an electronic, non friendly big machine connected with entangling wires, people thought in 70’s.

Today the digital revolution owes a lot to Bill Gates, for his wisdom, innovation and giving graphical interface to ever so boring computer operating systems before Windows 95. Windows 95 changed the digital landscape and opened doors for better earning opportunities, it changed everyone’s perception about boring, big computers and people began to realize the importance of computers in the times to come.

Very few people know about the stumbling blocks Gates went through before becoming successful. His first company did not hit the roof top, in-fact it was a failure. Bill Gates and his partner Paul Allen who later laid the foundation of Microsoft started a company called Traf-O-Data.

The objective was to read the raw data from roadway traffic counters and give the information to traffic Engineers. Traf-O-Data was a custom developed computer with a tape reader as you can see from the picture. 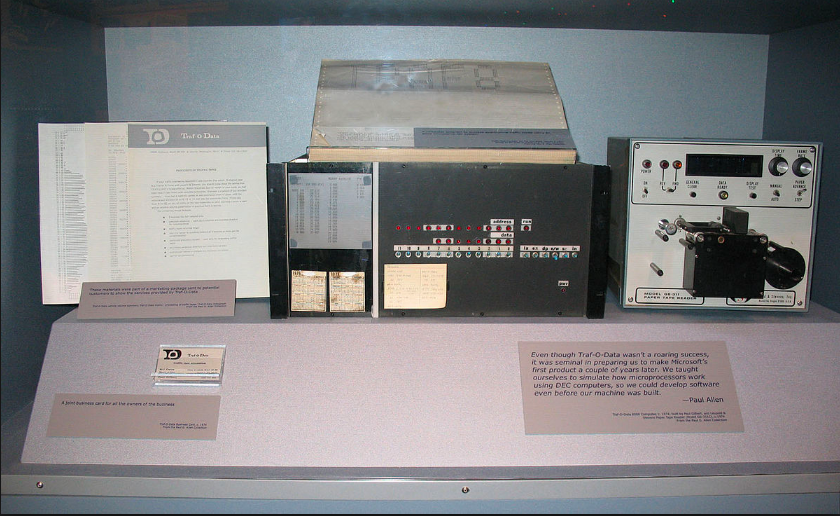 The company did not do good and eventually shutdown. Bill Gates did not lose heart, he and his partner Alan learned from the experience that was instrumental in making Microsoft successful and the rest is history.

Moral: Never give up on yourselves. You are as big as you challenge yourself.