The reason of warning is no other than his aggressive support at his official page for voiceless and helpless Rohingya Muslims being persecuted by racist government of Myanmar. We noted that Mr. Chaudhry has been continuously sharing stories of persecution of Muslims by Myanmar. His page has been massively reported by people of Myanmar, that being the reason of getting warning from Facebook.

After getting warning, Ashraf Chaudhry updated his over one million fans and he showed intention to intensify his campaign to expose the brutalities of Myanmar, no matter what. Mr. Chaudhry is vigorously targeting Burmese leader, Nobel Peace Prize Winner, Aung San Suu Ki as blood thirsty vampire as atrocities are happening under her nose. He also highlighted the mischievous and Machiavellian role of racist Monk Wirathu who is mastermind of killings of unarmed Muslims. 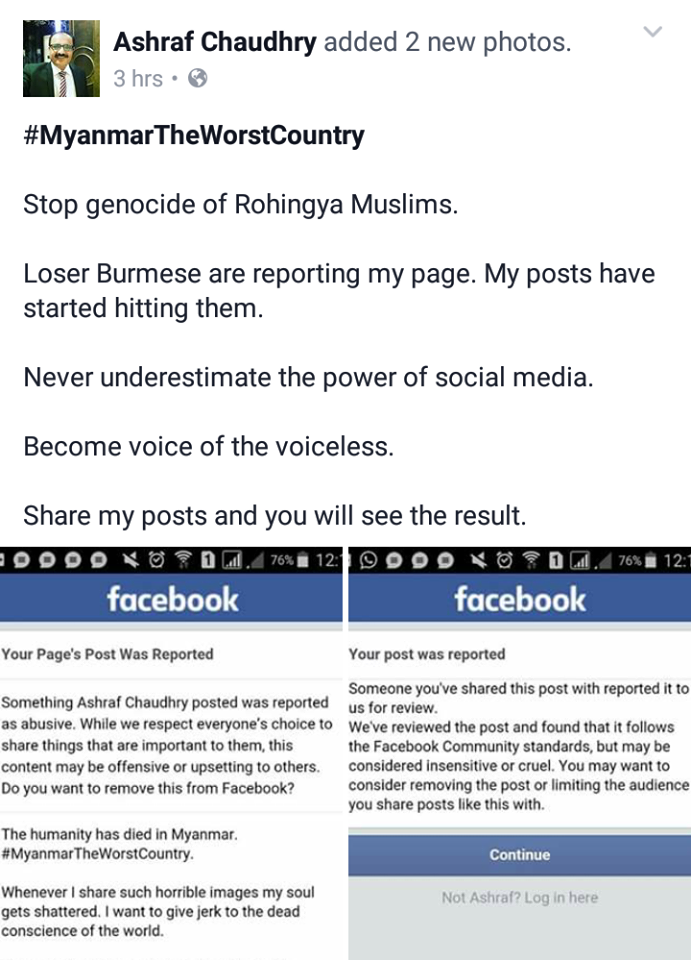 We talked to Ashraf Chaudhry today and he said that he was not violating terms of Facebook by exposing beastly treatment of Muslims by Myanmar government. It comes under freedom of expression and he will keep on jerking the dead conscience of global leaders, particularly Muslim leaders, whom he termed as impotent, spineless, corrupt and self-centric.

We noted that Ashraf Chaudhry is probably the only public figure who is vigorously creating awareness about genocidal activities of rogue government of Myanmar. Being Guru appreciates and supports every cause that helps the helpless and we fully support Mr. Chaudhry.

You can download Ashraf Chaudhry’s book The Craft of Selling “YOURSELF” by sending blank email at [email protected], you will get link within 5 seconds. You can reachout to Ashraf Chaudhry on his page here