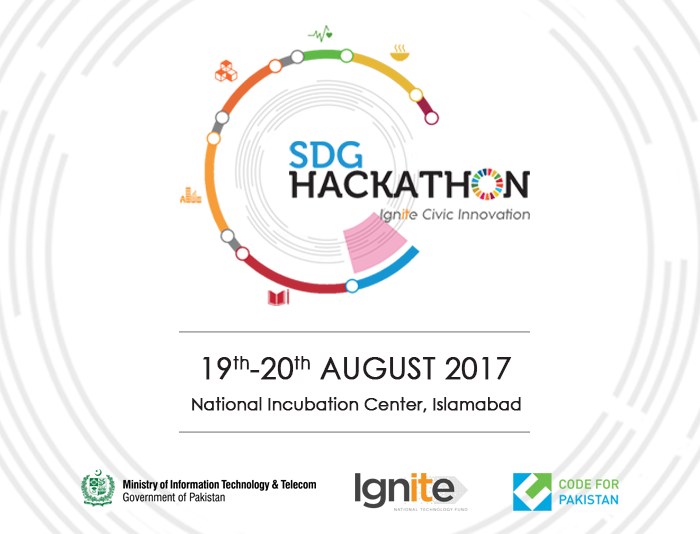 Code For Pakistan has organized many hackathons in major cities of Pakistan. At this time they organized Pakistan’s first ever hackathon in partnership with Ignite. The Code for Pakistan President Mr Asim Ghaffar said “Our hackathons spark civic engagement, bring together software designers, developers, and community organizers to solve their communities’ needs, and show what’s possible using technology. Some ideas later get pre-accelerated by our civic innovation labs so they can be incubated elsewhere. As a takeaway, participants generally become more civic minded and continue to engage in various projects which are in civic in nature,” This hackathon mainly focused on SDGs.

Ignite and Code for Pakistan partnered with ISOC globally to organize Hackathon. The event brought together programmers, designers, data analysts, community organizers, researchers, journalists, lawyers and government information persons to develop new digital and technological solutions that have a positive impact socially on our daily lives.

“During this hackathon, participants developed innovative solutions and presented ideas to address social and civic problems, and achieve selected SDGs. These are problems that the global market economy has not been able to address at scale, but which are very important for the human race and the planet. Ignite will endeavor to support winning teams in their onward journey through networking and access to resources,” said Yusuf Hussain, who is the Chief Executive Officer of Ignite.

A venture capital fund which is focused mainly on fourth wave industrial technology and to develop ecosystem is Ministry of Information Technology and Telecom. The mission of this ministry is to develop knowledge economy in Pakistan.

The projects were honed to the judges panel on Sunday evening. Participants worked enthusiastically on their projects. Participants worked on their projects over the course of two days, and then pitched to the judges’ panel on Sunday evening. Judges for the SDG Hackathon included Ather Imran (Sybrid, OPEN Islamabad), Kalsoom Lakhani (Invest2Innovate), Syed Ahmad Masud (Channel 7 Communications), Maryam Mohiuddin (Social Innovation Lab), and Owais Zaidi (CreditFix).

The first prize was awarded to 25A, which is a platform designed to provide equality to underprivileged children to private schools, in accordance with the Article 25 A.. The judges’ panel included Mr. Ather Imran ( SYbrid, OPEN Islamabad),

The second prize was awarded to SHELTIC, which is an NGO which builds shelters from recycled plastic waste materials.

The second event in the SDG Weekend was the SDG Challenge Cup. This was held on 20th August, 2017. The main aim for the event was startups to provide pitch to the judges. The selected SDGs for the Challenge cup were:

“The Pakistan Telecommunication Authority (PTA) sees its role as that of an enabling body, that can provide the right tech environment for innovation and progress, and this includes supporting innovation to address the SDGs. For the SDG Challenge Cup, we partnered with Ignite, Code for Pakistan (a civil society organisation), and with the International Telecommunications Union (the United Nations specialized agency for ICTs), to bring in diverse perspectives to solve these challenges, and we look forward to supporting similar initiatives in the future,” said Dr Ismail Shah, who is the Chairman of PTA.

First prize was awarded to Orbit, Skills Force got the second prize, Exam Bites the third and the special fourth prize which was sponsored by NIC was won by Multibiz Services. The first, second and third prizes were sponsored by Zong Pakistan.

For more details and information, drop a mail at [email protected]