Throughout earth’s crust, Arsenic is widely distributed. Commercially and industrially it is used as an alloying agent in the manufacture of transistors, lasers, and semiconductors. Through dissolution of rocks and minerals, arsenic is also found in water. This is the reason that millions of people have been exposed to arsenic in drinking water. The high concentrations of arsenic cause skin lesions, cancer, neurodevelopment delays, as well as cardiovascular diseases.

In Pakistan, a study has been conducted which has revealed that around 60 million of people are being regularly exposed to arsenic contaminated water. The heavy concentration of arsenic became visible in the 1990s when the studies were conducted across the Ganges-Brahmaputra Delta. Around 35 million to 77 million people in Bangladesh were considered to be at risk of drinking water high in arsenic. According to WHO in 2014, almost 200 people around the world are exposed to high levels of arsenic in water. 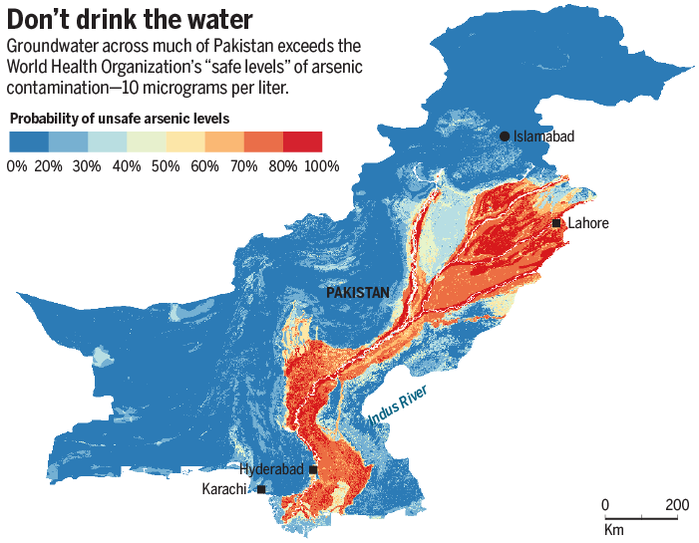 In Pakistan, studies have also revealed high levels of arsenic in drinking water. According to an environmental scientist Joel Podgorski, the groundwater in some areas of Pakistan contains high levels of arsenic. The samples were collected by Podgorski’s team from about 1200 wells throughout Pakistan at depths of 3 to 70 meters. Around two-thirds exceeded the recommended threshold by WHO whereas extremely high levels above 200 micrograms were found near the Indus River Valley. Being so much exposed to water, older sediments over geological times have washed out their arsenic to the sea. But high concentrations are found near sand and clay younger than 10,000 years.

According to Richard Johnston, arsenic is a serious health risk in drinking water. He suggested that a predictive method should be applied to areas of the world that have similar geologies as that of Pakistan. Other experts have suggested that Pakistani authorities should test wells in high-risk areas and warn communities about the high arsenic levels. People should be suggested to use water from deeper aquifers that are connected with older sediments. Another way could be to invest in treating groundwater for removing arsenic.