Talk about incredible business success, how about WhatsApp number of users. Last year, WhatsApp reported that it has hit 1B monthly users and within 365 days the number remains the same but the month has been changed to “Daily”. Yes you read it right, within 1 year WhatsApp users have increased from 1B monthly to 1B daily users.

WhatsApp slowed down SnapChat’s international growth by launching its Status feature. It was introduced as a new tab for sharing fancy photos, videos, and GIFs that disappear after 24 hours. It was another one of SnapChat’s feature that had been copied but Facebook gave it a twist with an end-to-end encryption such as WhatsApp messaging.

Recently, it has been reported that WhatsApp version of SnapChat Stories has 250 million daily active users around the world. This number is despite that fact that WhatsApp Status feature is a secondary dedicated tab in the app as compared to SnapChat’s Stories. It is equal to the Instagram Stories which has now over 250 million users on the platform.

If we compare it with SnapChat, it has only 166 million users for the entire app and it includes its private messaging feature and emoji badges. WhatsApp has been driven to 1 billion total daily users and 1.3 billion monthly users on the basis of its engagement with voice and audio calls, text messaging and engagement with Stories. This indicates that around 76% of users come back daily on WhatsApp. 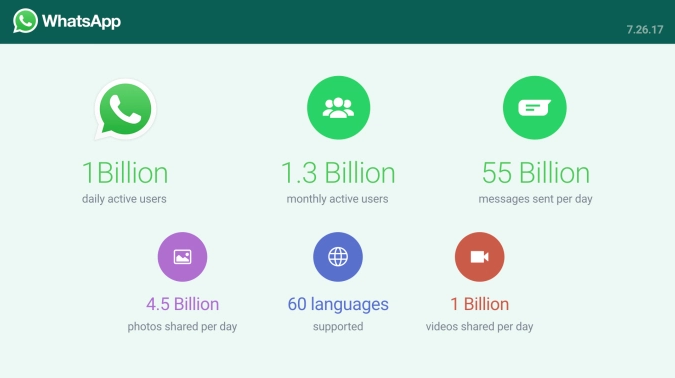 This metric update was announced by Mark Zuckerberg during a successful Q2 2017 Facebook earning call and was presented in a stats update on his Facebook Profile. He states that teams are being built up by Facebook and WhatsApp for monetizing the messaging apps. The status of WhatsApp can prove as a natural home for vertical video ads similar to the ones that are successful on Instagram. With this achievement, Facebook aims towards bringing more improved features to its users along with delivering reliability, security, and simplicity.