The Global Head of HR of BroadPeak Technologies, Mr. Jeff Thomas spent an entire week (24th-28th April 2017) in their Islamabad head office. It was his first ever trip to Pakistan and his colleagues were all very excited to meet him. There were spectacular presentations, individual & group activities and interactive sessions. There was not a single dull moment throughout the week. Overall the sessions were very thought-provoking. There were about 25-30 Rs. 1000 vouchers which were distributed to all those who shared an astute idea during the discussions. It was a great initiative to quickly break the ice. The managers asked Jeff politely if they could change the currency to dollars. The sessions had an element of humor and that kept the audience engaged. Different teams had lunch with Jeff throughout the week where they spoke to him about policies and procedures within the company. 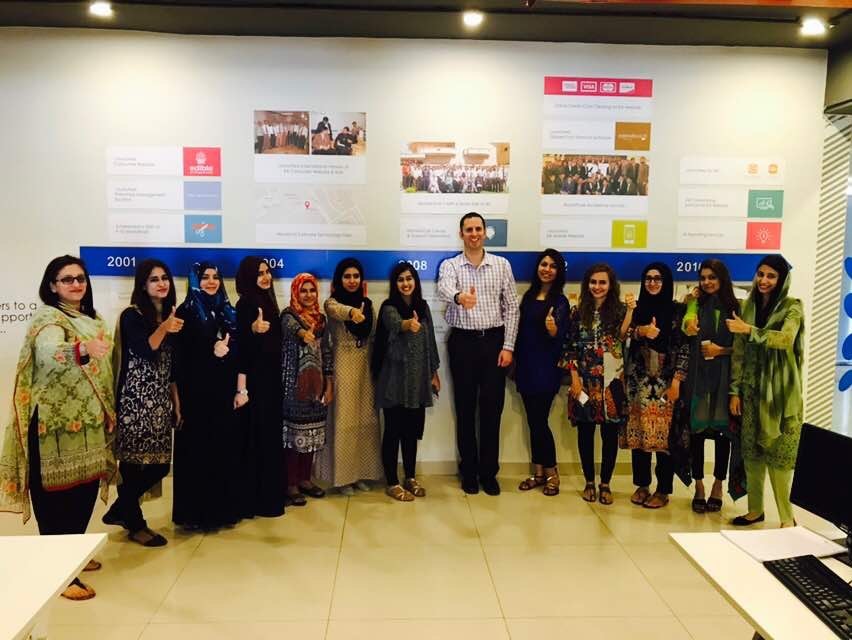 On Monday, the week started with Jeff meeting different teams one-to-one on a general getting-to-know mission. Speaking to him in small private sessions within teams was important for everyone to open up. The team leads informed Jeff about the current assignments/projects of their department.  There was a team huddle where he addressed the company regarding his visit and how he looks forward to knowing the management and employees better.

On Tuesday, the first Managers meeting took place in the conference room where Jeff asked all the managers/team leads to talk about their passion, hobbies and role models. It was an ice-breaker session where he got everyone talking. So much that the number of questions then had to be restricted as everyone opened up to Jeff far more than expected. The discussion then moved on to what we love about working for BroadPeak Technologies and what we think needs improvement. After that the topic was who we are, why we are here, what do we do and how?

On Wednesday, the focus was on team-building and Talent management. We discussed what High Potential Talent means. A quarterly employee performance score card was distributed along with the definitions and examples of core competencies we are looking for. A 9 box grid activity started where performance and potential of employees in different departments was evaluated. The purpose of this activity was to figure out if employees are the right fit for their positions and to provide them with adequate training. The objective was to get the best outcome from all human resources within the company and minimize the turnover rate.

The session of Thursday stood out the most. It was on Change Management with the theme: Don’t fear change, embrace it! The discussion was on positive ways to thrive during waves of change. During change management discussion, he asked his audience regarding the most significant change which has happened in BroadPeak affecting you, do you like the change? And what are the risks of not changing. Lastly the audience filled out a Wheel of Change. This is basically for professional and personal reasons. How do you become the person you want to be? What do you want to create, eliminate, preserve and accept in your personality?

On Friday, the session was on Managers versus Leaders. It was agreed that Managers are task oriented whereas leaders are solution oriented. Organizations need a combination of both to excel. Jeff said he is very happy about the open door policy in BroadPeak Technologies. All managers are approachable. The session also touched Emotional Intelligence and linked it with Leadership. Girls of the company had lunch with Jeff where they discussed some HR related issues. At 4 pm on Friday, the last huddle with Jeff on this trip took place where there was a huge cake cutting ceremony. He thanked all the employees of the company for his trip and announced some new policies of the company including casual dress and holidays. The team presented Jeff with some gifts before everyone enjoyed the sumptuous cake.

The management’s messages were very well received. The audience loved the time, energy and effort Jeff put into his sessions to make them sheer success. It was overall a very eventful week full of thought-provoking and interactive learning sessions.