Among the Nintendo’s investors, the new iPhone game Super Mario run failed to make an impact. The performance of the game has led to decline in the share prices due to the game’s payment model. Although it did got downloaded a decent number of times and generated revenues. According to latest data from app intelligence firm App Annie, the game did gained respectable amount of shares and revenues. The initial three days of the game on the market Mario got 37 million downloads worldwide and generated $14 million in revenues. 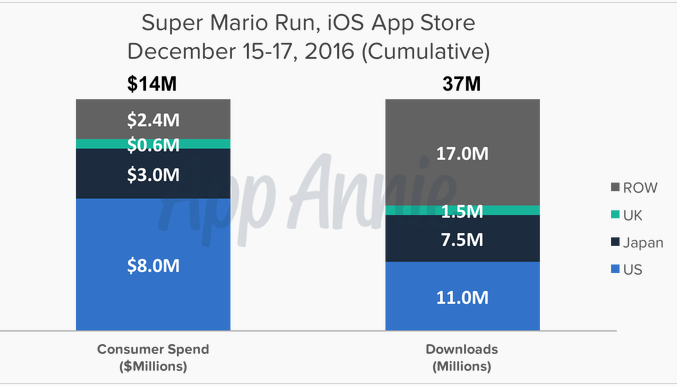 From the total worldwide spending of 14 million, US consumers contributed $8 million. Japan stood on the second place with $3 million spending with $600,000 by UK and $2.4 million were added by the rest of the world.

According to Sensor Tower reports, Mario appeared to be the fastest game to reach 25 million downloads. In four-day opening weekend i.e. December 15-18, 2016, Mario pegged $21 million. Despite these high revenues, the app analytic firms came up with different number from one another. There is an argument which states that these figures could have been higher if the app had not been over priced i.e. $9.99 for the full Mario version. Some customers were offended with the price of Mario on the iPhone which is $10 mobile game with limited content. Also the free tier offers only few levels to play and the always need for an internet connection has forced some of the customers to leave it with just 1 star reviews.

Even on the day when it was launched, many of the customers left one star reviews for the game. More than 63% of ratings from Japanese users and 57% from US user ranked the game to just one star. These reviews indicated price to be the biggest issue for such ratings. Another report backed up these ratings by confirming that 58% of all reviews worldwide have been one star reviews for the game. The game was not disliked by all, there are many who loved to play this game. The dislike is on the basis of the cost and online compulsion for playing the game. Apple has prepared for Mario status as an app which may not end up due to these issues. Apple delayed its reviews from appearing on the App Store for a longer time then it normally does for any game. It took almost 40 hours for Apple to let reviews appear on the store whereas the standard time is just of 8 to 12 hours.

But now it is becoming more apparent that Super Mario Run users are leaving fewer reviews as compared to Pokemon Go users did. Around 30,247 reviews had been given by Pokemon Go users up till now whereas only 27,721 reviews have been given for Mario in the US App Store. This indicates that Mario has failed to attract users on a broader level.

The reason might be the difference in the two games. Pokemon Go was a game that sent users into the real world to battle with their mini monsters. It took full advantage of the iPhone sensors and camera for engaging its customers. Whereas Mario just one-handed endless runner game that can be played very easily. With a drop in the game’s price, it would be better for Nintendo to adjust its strategy to move the game to Android.