Government requests for user accounts around the world rose to 27% in the first half of 2016 as compared to last year’s second half. In Pakistan a similar theme is being followed related to government requests. For the period of January 2016 to June 2016, the number of total requests increased more than 200% as compared to the same time last year.

Around 1,029 account requests and 719 requests by the Pakistan’s government were made in the first quarter of 2016. For 65% of the cases the data was made available by Facebook. This is first time ever that a leading social network has provided information related to the number of account preservation requests by government regarding 280 cases. 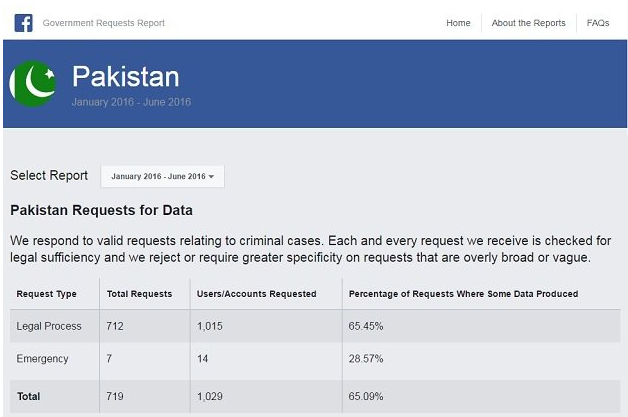 Also for violation of local laws, Facebook has locked 25 pages in the country. According to a statement on the social network’s website, access to content has been restricted due to legal requests from Pakistan Telecom Authority. These requests were made to stop the violation of local laws, blasphemy, and desecration of national flag as well as condemnation of the nation’s independence.

“Based on legal requests from the Pakistan Telecom Authority, we restricted access to content for allegedly violating local laws prohibiting blasphemy, desecration of the national flag, and condemnation of the country’s independence,”

Globally, the government requests for account data increased from 46,710 to 59,299. Out of these requests more than half contained a non-disclosure order to prohibit Facebook from notifying anything to its users.

Via: The Express Tribune