With the developing technology, earning money is becoming much easier as it was possible in the past. There are so many opportunities available on social media than you even realize. It is a lucrative platform for connecting with people and building a trust with your followers. The followers are more inclined to stay updated with latest recommendations and the links that creators share.

This is the reason Twitter has taken an initiative to boost its user base. On their Official Blog, it has offered its users to post on Twitter and earn money. The publisher of the videos will get 70% of the ad revenue. This percentage of revenue is much greater as compared to Facebook or YouTube which offer 50 percent of the total revenue. 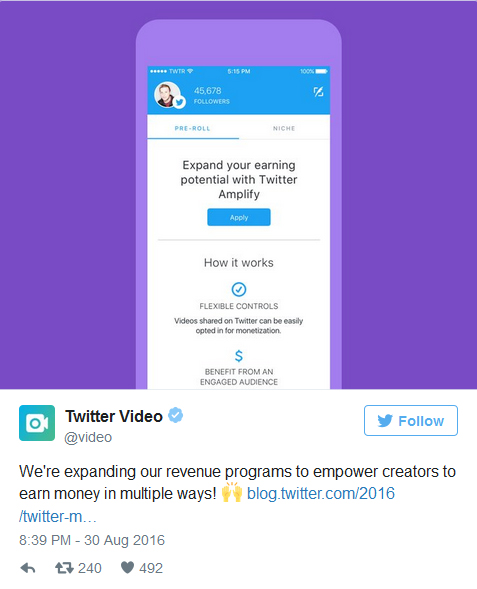 Twitter wants to make its platform more appealing to the content creators. This will further attract a massive audience that will follow these creators. For creator’s Twitter is offering a new media library with videos, GIFs and images.

It is providing more tools for managing multiple accounts along with tweet scheduling and planning. In June, Twitter Engage App was launched that helps content creators to manage their videos and to make money both on the desktop as well as on their cell phones.

The best part is that Twitter does not require the content to be exclusive; creators are allowed to post the same video anywhere else as well if they want. But Twitter has not offered any kind of advance funding to creators in the form of incentives for trying the program. Facebook has been paying all of its users to use the live streaming feature.

It is paying more than $50 million to 140 media companies and influencers in order to encourage the users to experiment their features.

Twitter with its new program is offering longer videos, new ways to explore videos, and improved ways for creators to connect with their fans.

Twitter wants to attract creators on a bigger level and offer them the opportunity to monetize their content in multiple ways and generate revenue.